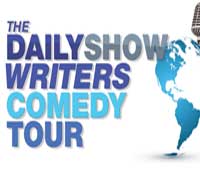 Presented by Praia Entertainment Group
The Daily Show is Comedy Central’s longest-running program - with 24 Primetime Emmy Awards - and now the 4 brilliant comedy writers who make it all happen are taking the stage to crack you up in the flesh! With 700 million video views on social media, The Daily Show with Trevor Noah continues its digital and social tear as the most engaging series across all of late night TV. On May 1st, you’ll meet the comics behind the jokes that make America laugh every weeknight on Comedy Central’s premiere late night talk and news satire program. From making fun of their failed dating lives, being a cat owner, or talking about important events of the day, the Daily Show comedy writers have something for everyone!

Here’s a closer look at Who’s Who in this funny funny Show!
Emmy-Award-Winning comedian Matt Koff has written for both The Daily Show With Trevor Noah and The Daily Show with Jon Stewart. His standup has appeared on Comedy Central and History and his debut comedy album, Who’s My Little Guy was released to wide acclaim during the summer of 2019.

Comedian Kat Radley has been featured in Glamour Magazine and The Hollywood Reporter as one of the top female writers in late night television. Kat has performed standup on FOX’s Laughs, and her jokes can be heard on Sirius XM Radio, Pandora, Spotify. Her debut album is entitled, The Important Thing Is That I’m Pretty and she’s no stranger to big stages, having headlined SF Sketchfest and the Women in Comedy Festival in Boston.

Comedy fans know Randall Otis from the New York Comedy Festival or the New South Comedy Festival, VICE, Above Average or AllDefDigital. In addition to writing for TDS and performing all over the country, he’s writes for The Huffington Post where he was responsible for articles such as “Absence Makes the Heart Grow Fonder and Other Reasons I Abandoned My Family!”

Joe Opio is a Ugandan stand-up comedian and writer on The Daily Show in addition to being a
trained lawyer and accountant. Joe is an observational satirist whose stand-up has been seen
on three different continents from South Africa through Switzerland to the biggest comedy clubs in New York. Opio has written over 360 episodes of The Daily Show and is a WGA Award nominee.

Don’t miss this one-night-only laugh-fest featuring 4 of the hottest and sharpest award-winning comics in the country.

This performance was postponed from 5/1/20, tickets will be honored on the new date. If you are unable to attend the new date, please email tickets@tarrytownmusichall.org with your order number to receive a full refund.